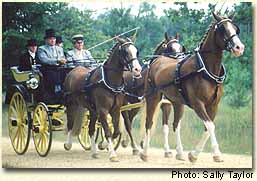 The Red Rover Rosette is awarded to BDS members who complete EIGHT affiliated show drives in a single showing season with the same horse or pony. The rosette is named after the famous Red Rover coach owned, shown and driven with great success by the BDS Founder President, the late Sanders Watney and which is now in the care of and driven by Mark Broadbent of Fenix Carriages, Devon, who also sponsor the award.

To win this award for a special driving achievement you should collect the BDS Drive Rosettes presented at all affiliated shows where a drive is completed. Note the date, name of the show and judge on the back of each rosette. When you have been awarded eight or more rosettes, send them to the BDS Office, together with an application form. Once the show records have been ratified, your rosettes will be returned. Applications must be received by the end of September each year to qualify.

The Red Rover Rosette and commemorative prize will be presented to you at the BDS Annual show.